About Temple of Diana

The Temple of Diana is dedicated to the Continental European Craft, with a particular focus upon European Mysteries and Hermeticism as taught during the Italian Renaissance 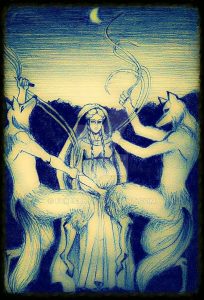 . While the Temple’s official pantheon encompasses a Southern Itallic framework, individual members are encouraged to work with the Deities (generally European or Middle Eastern) that call to them individually, our Priestesses and Priests all follow their own individual paths while working as a body to honour the Gods herein.

Our foci as an organization are service to the Ancient Gods our Ancestors, to humanity, and to ourselves. How these objectives are obtained varies – from Temple specific projects to individual endeavors. Our Craft priesthood is a 24/7 vocation.

Temple of Diana, Inc. is a Non-Profit, 501 (c) 3, Religious Organization Incorporated in the Commonwealth of Mass, with chapters in Ohio and Oregon States.

Ours is not the only one in which is incorporated, and inasmuch, I just want to make the distinction between the two, in our Temple we Honour both the Mother Earth and Father Sky as without duality there is no balance. We are NOT Dianic Wicca, we are of the Old Religione and as the Ancient Temple of Diana, in Ephesis and the other Ancient Lands. Diana’s Temples were a place for ALL to come and venerate, worship, prayer and ask of Her assistance, she never turned anyone away.

The real Mother did not make judgments based on material wealth, but that of the True Spirit within the individual and in that she allowed the homeless, the poor, slaves and all to come to Her Temple/s to bring their love and honour to Her. This is the True path of a Witch as well, and in that, that is what seek to remember and that is what we seek of those who come into our Temple to learn from the teachers in which are within. The true teacher is Self for in seeking Self, true self you find what you seek from within.

Our Temple Gods are Apollo and Diana as well as Demeter, Kore, Kybele, Attis and all Gods of all faces and guises, and we must not forget Hekate the Mother of the Darkest Night and Witchcraft and keeper of the Dead and Mother of the Underworld. Insofar, we also honour all other Religions as we know that our path is not intended for all. We do not make any claims to be from the Ancient Cult of Diana which is known from the Lake Nemi region in Italy, we are simply the lost children who are remembering who we are, Witches from the past returning home.

Temple of Diana does NOT have degrees, we follow the teachings of Strega as taught to us and within that structure of oral teachings we are taught that “True Initiation” comes from ones’ life experiences and lessons. That and how we handle what comes into our path is our Initiation. There are of course those Initiations in which are of the Greater Rite and that is kept in secret and never spoken of outside of Initiate and Initiator. The degree system is something that was brought in by the Masons and Wiccan Traditions following behind.

The Strega work hard with oral training. Our studies and doing our work for others and upon evaluation one is Ordained as a Reverend and with that one is giving the title of HPs or HP. Yet, the true Initiation comes following ones’ Ordination, we can be given title but it is what we do with that title following that will define or destroy a person. Following that from there one has to prove by their thoughts, words and deeds they are worthy of carrying and holding such title.

The Gods are the ones who Validate in all things, that is NOT something in which man has the rite or rule over any one person/s.

We do work with the community and those organization in an effort to better not only humanity, but the lands of the Mother and the protection of all her creatures, human or not, we are all of the Mother and Father, respect and honour each other and all that we have on this Earth.